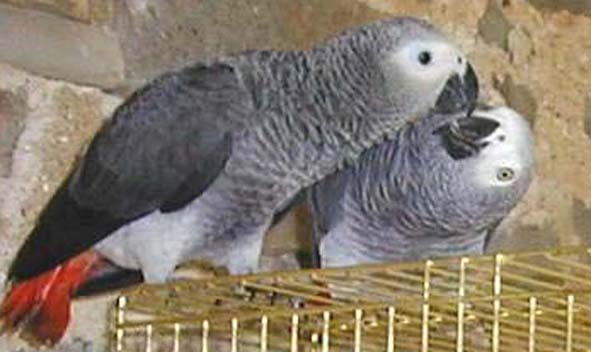 What a marvelous success! At first it looked very bad.... Cookie was not behaving like a gentleman at all but called out 'CATS....CATS' whenever he saw Sugar, which is his way of stating clearly that there is danger afoot. He had even chased poor Sugar around the conservatory where he lives.

So she was moved into the kitchen with her cage, climbing equipment and toys. Several times every day I would carry her into the conservatory to visit the reluctant suitor. At first I had to put my apron over her head as she was really scared of him.

After a few weeks of visiting she was not nervous any more, and he became more and more interested. I carefully observed them..... Cookie seemed particularly upset when he was ignored by her while he was showing off first one leg and wing, stretched out seductively And, oh joy!!! Folded his wings upwards behind his body, shoulders meeting as he demonstrated what a lovely, handsome fellow he was. Sugar did not even notice it the first few weeks. That's what got to him... Ah, the vanity of some guys!! Hell hath no fury as a Cookie scorned!! 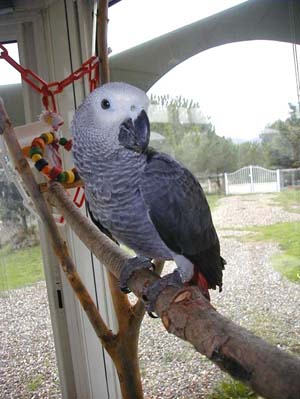 Then.... the miracle happened! Little Sugar stretched her wing out too, and her leg..... in response to him. From that moment on they didn'tlook back. I still just visited with little Sugar, but now I carry her paraphernalia in too. Her cage, her climbing branches and toys.... Now Cookie cries when I take her out to the kitchen, or when she visits me next door in the sitting room, like now, descending neatly on my shoulder.

And little Sugar calls out to him when she's in the kitchen, calling 'Cookie' and making lovely seductive wolf whistle sounds. So maybe tonight we'll leave her in the conservatory with him, carefully closing the door, so Plato, the cat who usually sleeps with Cookie in the conservatory can't get in. Although I've heard tell of parrots chasing cats round the house I fear Sugar is far too little and too innocent in the way of cats to trust them there together. 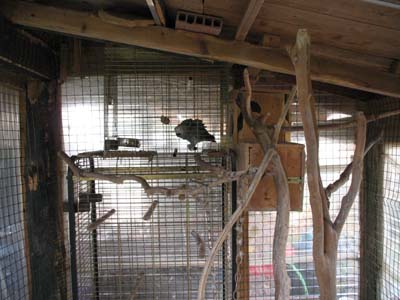 We are now a few years later. Cookie and Sugar have been living together in their luxurious aviary. Within it is an open cage and attached to that the 'bedroom'. Made in the shape of a boot and revamped by Cookie and Sugar with extra 'windows'.

All last summer Sugar was busily laying eggs in it and conscientiously brooding on them. None of them worked out till.......

Just two weeks ago I heard a little 'chirp chirp' which seemed to be coming from the 'bedroom'. Thinking it must be part of the aviary squeaking in the wind or even a handicapped mouse who was stuck there I peeped in. And there was a tiny tiny chick!!

A week later I noted a banging sound coming from the bedroom. Both parents were in the main compartment, having their dinner so the banging was being produced by the little chick. We thought of calling it Cherry Blossom (if it's a girl) but after hearing the banging we considered BamBam! Whatever the sex.

We turned up the temperature to extreme levels and gave them extra food. Both parents appeared to be feeding the little one. Here you see Cookie looking at the camera suspiciously.

Oh if only we had made the front of the bedroom in perspex (with a wooden cover as a curtain) so we could see what is going on in there. Opening the little door in front without disturbing them is almost impossible. But today we managed to open it a crack to check on it. There was the tiny parrot baby on its feet looking fine.

On the 7th December 2009 I sneaked a peep at the little one, carefully but quickly opening the little door of the bedroom just a crack. Mother Sugar nervously shot back into the bedroom to check all was well with her offspring. And there I saw the chick, sitting up and looking at me, his/her beak black and open towards me.

Today, the 30th December 2009 I made the first photo of the little parrot, opened the door to the 'bedoom while Sugar and Cookie were outside having a bite of parrot food. 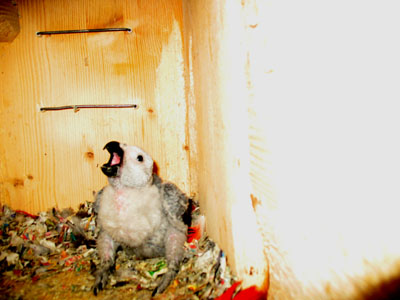 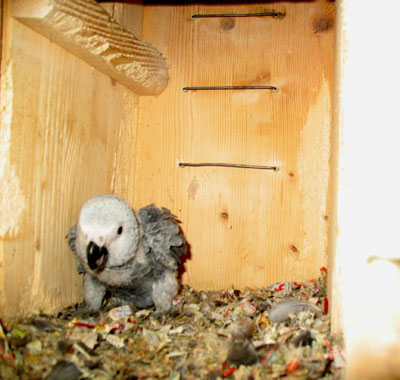 solid food. No go!! Cookie and Sugar were terrified by the change and clung to the ceiling refusing to go into the inner cage or 'bedroom'. After

waiting for hours we worried that Baby wouldn't be fed by his absent parents and removed the balcony. This went on till midnight, all the time

running 3 or 4 electric blowheaters as we have been doing during this abnormally cold period. The electricity bill will be horrible!! Just hope Baby will at some point manage to climb up and out by himself! 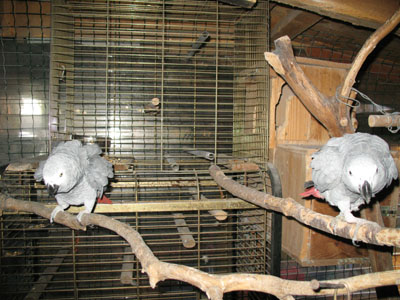 note the extra 'window' in the bedroom they made all by themselves! 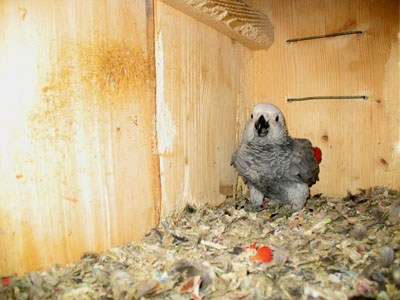 Sugar keeping an eye on open bedroom door and Baby 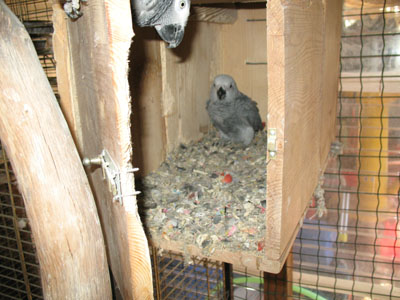 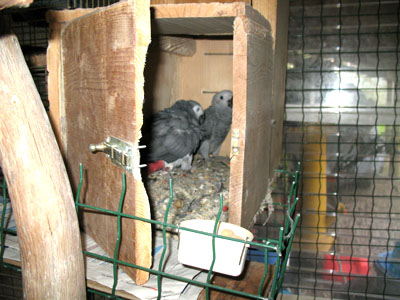 Finally (January 28th 2010) managed a little 'balcony' of wire that does not scare Cookie and Sugar. However, Baby is not risking going near it. But still expects his parents to feed him. Note how large Baby, 10 weeks old, is compared to his/her mother Sugar standing beside him in the bedroom.

This morning I could not believe my eyes!! I went in to feed the parrots and there were three parrots sitting on the perches in the main cage. One of them is Baby with his father, Cookie, next to him. And Baby is huuuuuge! Baby looking a little uncertain and corrected by Cookie when he tries to move the wrong way. But Baby convinced he owns the place. Baby got quite annoyed when I had to put my hand in to change the water, growling at me. 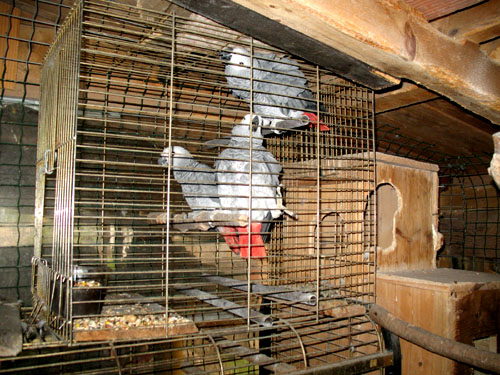 One thing is clear, we should never have named him/her 'Baby'. As it's quite clear and well proven that all creatures behave according to their name this was a clanger we dropped. He/she never stops wailing. At the drop of a hat Baby decides a racket has to be set up to alert the whole world to the worrying appearance of say, me going in to feed them wearing a rain hat. Dangerous things ..rainhats!October 2010Baby the TERRIBLE!! Allan is convinced Baby is a female, but then he thought Tigger our cat was a female too, he was wrong....Baby gobbles her evening peanut in seconds and then proceeds to pull the peanut out of her mother's beak, swallows it and repeats the crime with Cookie, her father. They let her get away with this.... They shouldn't!I'm very relieved that they are not trying to produce more babies. October 2011

Here's a video of the whole family on YouTube