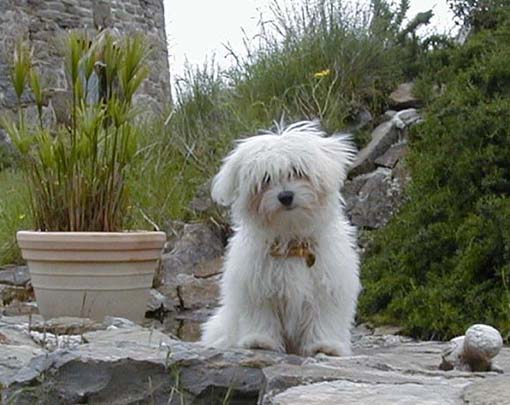 Here you see Fifi, our tiny Coton de Tulear. We got her as a pup and on this photo she is still not fully grown.

Our gorgeous Little Leroy passed away in 2003. Little Leroy, a Montagne de Pyrenees, weighed in at a good 60 kg. But Fifi managed to keep him in order with no trouble at all. To get a better idea of his enormous size, look at the photo of La Couscouillette on the home page. You'll see Little Leroy in the grounds.

Traditionally a Montagne de Pyrenees would work together with a Berger de Pyrenees looking after the sheep in the High Pyrenees mountains. The Berger (French for shepherd) is very intelligent and will steer the sheep to safety, following directions from the shepherd, or even on its own initiative. But if a large predator, such as a wolf, or a bear appeared, the Montagne de Pyrenees would be called in by the Berger. Mr. Muscles can deal with a wolf all by himself. Two Montagnes can tackle a bear. They have recently introduced wolves and bears there again as there were no longer bears or wolves in the Pyrenees.

It was amusing to see how Fifi, at just 6 months of age would call these very primal instincts of Leroy into operation. When she (usually misguidedly) sounded the alarm, Leroy would rush along, checking things out, sounding his huge, deep bark. But most of the time she

just had fun with him, jumping on his back, or hanging on to his tail letting him drag her along. And when Little Leroy, who was basically a huge baby, lay around whimpering for no reason...along rushed Fifi to comfort him.

Fifi was heartbroken when Leroy died. She had been used to sleeping on his back at night and had to be taken into our bedroom and comforted at night till William arrived. 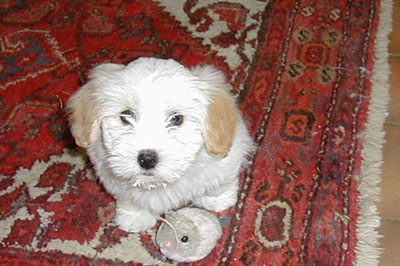 Willliam is seen on this photo at the age of 10 weeks with his favourite toy; 'Mr Mousey'