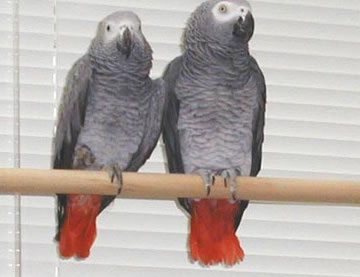 It had been love at first sight, but sadly enough Honey died in the Spring of 2003. Cookie was heartbroken. We spent hours and hours sitting with him and talking to him to help him over his loss.

After waiting for 7 months we decided Cookie was not going to succomb to the mysterious illness that had taken Honey and went looking for a new partner for Cookie.

Studying books and combing articles on the Internet we decided on a hand reared baby girl and found one at a breeder near Grenoble (almost in Switzerland), about 4 hours drive from here. 3 months old and cute!!!!

I had emailed Bobbi Brinker about getting a new mate for Cookie and she had warned me that he would not necessarily take to her, she was right..... Maybe because she is still so young, maybe because she has been reared by humans from the egg up and doesn't know how to behave in polite parrot society? Cookie was making friendly noises in her direction , Sugar was in her own individual cage in the conservatory, near Cookie, who was out on top of his cage. Sugar just ignored him. Cookie became more persistent and started mentioning 'cats' (loudly), which in his world spells something very unpleasant... no reaction.

I was out of sight for a moment when I heard Sugar yell. Fifi (our little dog) and I went running to see Cookie flying off Sugar's cage, back to his own in a pretty guilty manner.

Sugar was unharmed, but I decided not to leave her near him any more, it's not good for her psychologically to be intimidated by Cookie. 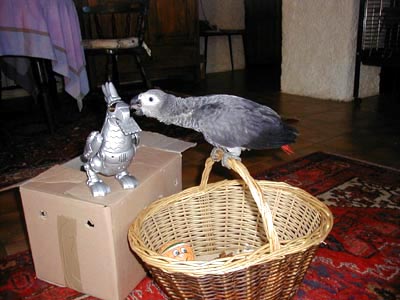 So now she's in the kitchen, which means that we have been cooking with the only old fashioned non Teflon utensil I could find, an old copper and tin frying pan.....

Here you see Sugar and Tekno Polly chatting to

each other. But Techno Polly is not quite the real thing...... 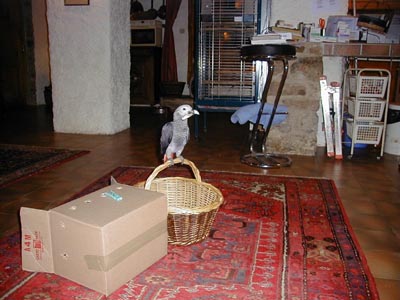 She's learning to fly, landing in all kinds of inappropriate places, but I haven't the heart to keep her confined in her cage all day, so like all parrot mums I'm stuck in the kitchen, watching....

Sugar and the Spoon

We hoped that Cookie would accept Sugar. See what happened having waited a little while, carrying Sugar in to visit Cookie a few times a day, until then, there was Fifi, who was very very sweet with Sugar.