The Story of Henry

Henry was one of 10 tiny chicks. All of them were born in Bresse, that center of excellence for chickens. We, that is my husband and I, used to fool ourselves that living on a semi-farm we would actually farm our own dinners. Now, that is fine for tomatoes and other types vegetable life. But how can you eat a person you know personally? It's cannibalism!

We had been staying in Holland for a week or two. Work. I had phoned the Bresse 'elevage' and spoken to a friendly monsieur who promised to save 6 baby chicks for me. Up before the crack of dawn, driving our Spider through the night of Northern Europe, rushing to get to Bresse on time. 'Get here before 2 pm', the nice monsieur had said, 'if not.......it'll be too late'. Sounded ominous. At 1.30 pm we were completely lost, rushing around the outskirts of Bresse, in circles. A phone booth... rushing into it, stumbling with my bad French I explained we were on the way....please to wait.

But madame, I have no baby chicks, said the monsieur. I could not believe my ears; 'But you have promised....' He finally succumbed to my urgent appeal and told us to

come. 'They are reserved for an enterprise who have ordered 300 chicks. They'll not care if there's a few less', said the man.

He wouldn't take a cent for the 10 baby chicks (madame, I don't know if they're females or males, better take a couple extra), and gave us some chick food to start them off. 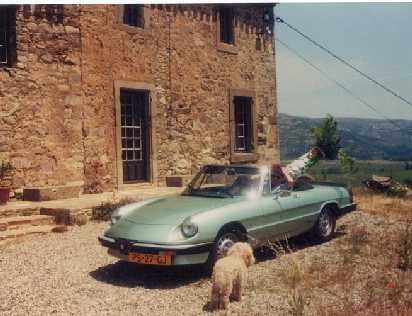 One day old they were, in the back of the Spider. The monsieur had given us vitamins for them too and told us to keep the temperature at 30 Centigrade. That is hot!!!So with the heating raging and baby chicks in the dog seat of the Spider we sped across France. Talking to the chicks all the way home.They had to be put in a bedroom in the house, as their 'chateau' wasn't ready yet. Known hereafter and forever as the 'chicken room'.

After a week or two it became evident that we had acquired 3 cocks and 7 lady chickens. We gave them all names.... There was Cinderella, who looked funny with her squint and crooked legs. She would have been 'culled' for sure if she hadn't arrived at our establishment. There was bad Bella, who picked on the others, and good Bella who was picked on a lot. Well....chickens have their pecking order, I suppose it's normal. In spite of knowing that Allan used to crouch in the grass for hours, throwing little pebbles at Bad Bella when she was misbehaving. It didn't cure her...

The three cocks were named Ivan, Fred and Henry. Ivan was very agressive, pecking at anyone, chicken or human who came near him. Apart from Fred, who slept with his head under the wing of Ivan. Fred was scared of everything and everybody. And then there was Henry. Henry had the perfect manager personality. He was kind to the 'ladies', alerted for danger with a lovely kukelekoooo. And... looked the other way if things became too hot under his feet. Henry enjoyed being stroked by the humans and learned not to peck them.

We never had any chicks. Probably because we became so excited when an egg was fertilized that we couldn't keep our hands off it. Candling it to check the chick inside etc and disturbing the poor mother who then wouldn't get on the egg any more to brood.

Henri had created a problem while doing his duty as a male when he put too much weight on one of the ladies and sprained her leg. She was limping around so I took her to the vet. The vet looked quite perplexed and exlaimed: 'Madame, here in France we don't medicate chickens, we eat them in these situations'. He wasn't much use, offering a smelly cream for her leg resulting in her ostracism by the group. I had to scrub the cream off her leg, then isolate her for a few days till the smell as gone before integrating her in the group once more.

Henry survived many many generations of lady chickens. Finally, when he was 7 years old, and the vet remarked that he had never seen such an old chicken he could not stand up under his own steam for long...let alone do anything else...

He took to leaning against a bush, so the ladies wouldn't see he was about to fall over!!

One sad day, as he was out behind the house, escorting a few lady chickens, an eagle swooped and took him off. He died the death of a hero. And will always be remembered. To this day and forever there is a Henry weathercock on one of the mills, in fond memory of Henry the Great.